All roads lead to Winnipeg

…at least if your airport has a minimum of two bars of demand.

To celebrate the occasion of having connected all relevant Canadian airports to the heart of Manitoba, I’ve drawn a little routemap for my overpriced airline - and while I was on it anyway, made one for the other hubs too. 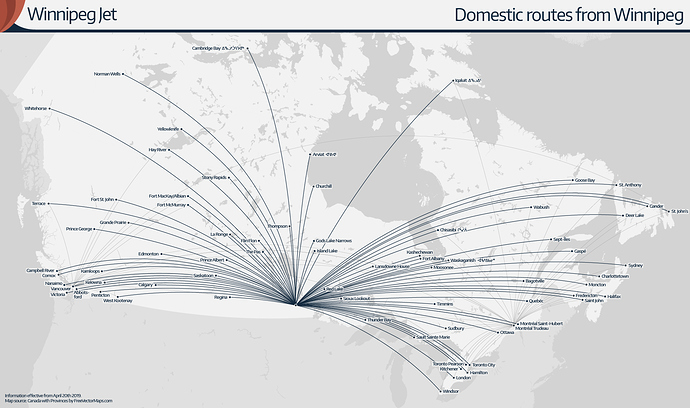 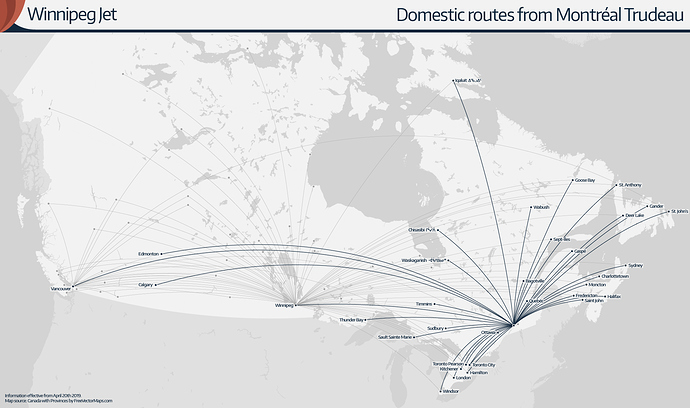 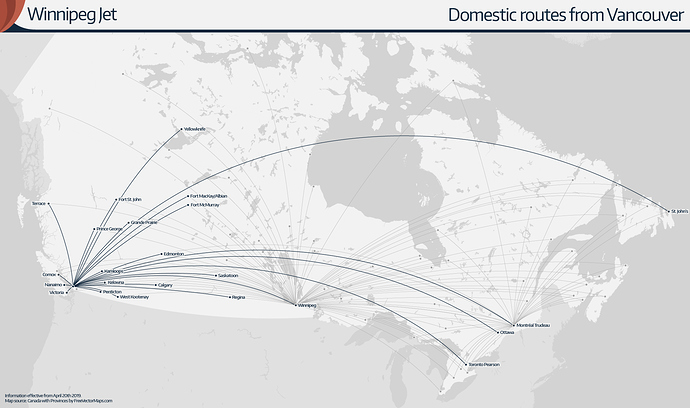 You must be cheating

Beautiful maps. Reminds me of airline magazine level of quality.

Thanks for feeding my flights to/from Tulsa! More than half the pax travel through you.

I really hoped that there would be someone who understands the reference.

Goose Airlines’ routemap to 59 one-bar airports is coming next. Still 128 airports to go then…

This is awesome. How did you make it?

Adobe Illustrator for the drawing, ASRoutemap to locate all the airports as precisely as possible.

Any suggestions for a good tutorial for building one? Cheers

Unfortunately, no, actually. It was more of a design exercise for myself so everything was just trying to find methods that work for my specific purpose and desired design language. So basically, it was “just” finding a good base map (freevectormaps.com), mapping all the 70+ airports by hand and then playing around (a lot) with colours, lines etc.

So it looks like I’ve abandoned my little airline for 2.5 years straight. How time flies! Meanwhile, the last remaining large competitor has taken the number 1 spot in Canada and, more importantly, they are now leading at the three main hubs of Toronto Pearson, Vancouver and Calgary.

Quite a few things have happened in the last few weeks:

Dream big, or: The tale of the Transatlantic Turboprop

Fleet restructuring is still underway at Winnipeg Jet, and this will include the phase-out of all 35 aircraft of the EHGW variant of the De Havilland Dash 8-400. Before this happens, we want to give the aircraft a chance to show its true capabilities.

In order to re-live the old days of transatlantic flying, C-ACML has been equipped with a comfortable 36-seat configuration in order to operate the route between St. John’s, Newfoundland and London City, UK - with the classic refuel stop at Shannon, Ireland! With a distance of 3,142 km for the transatlantic leg, covered in six hours, we will allow passengers to have a truly unique (or terrifying) flying experience and to contemplate their life choices. Keep your life jackets at hand! 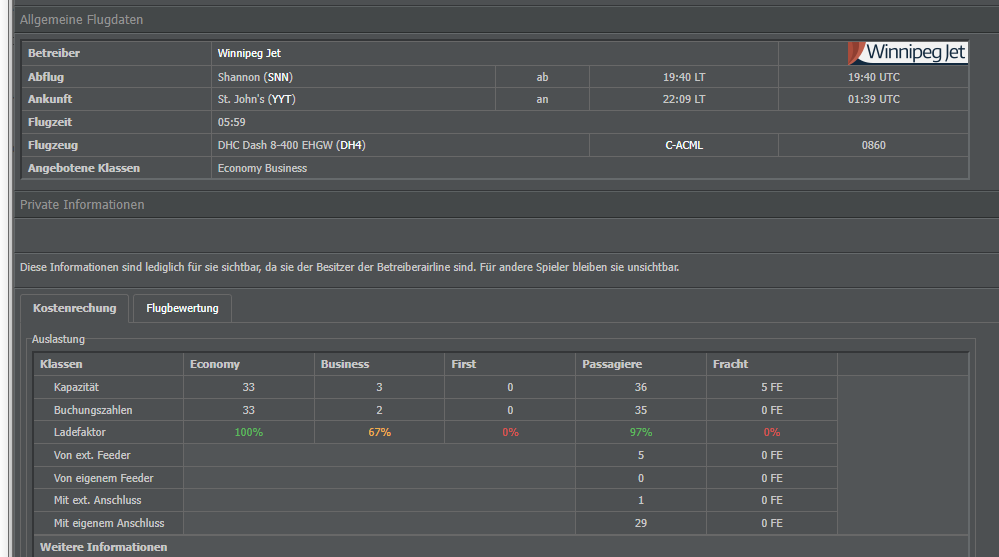 Pacific Adventures, or: How many Fleet Managers does it need to operate a single aircraft?

The southern Pacific region always risks being underserved by the AS community. Fiji, as the most viable country in the region, hasn’t had an airline for ages. No airline holding French traffic rights could be bothered to put up an airline in French Polynesia or New Caledonia either.

So it’s time for the countries open to investment to shine. Papua New Guinea and the Solomon Islands have had successful subsidiaries of globally operating airlines for a while now. Papua Jet, a Winnipeg Jet subsidiary, is the longest serving airline in the region and, after the collapse of neighbouring Fly Indo, has received an increasingly more important role in connecting East Asia with Oceania.

Speaking of Fly Indo, its subsidiary Fly Samoa held a unique position in Polynesia. Luckily, its operations have been taken over by a new airline in the Winnipeg Jet Group - Samoa Jet. Not only does Samoa Jet provide essential services to the region, it also serves as a testament to the Airbus A321LR and its range, which allows for cost-efficient transpacific services to the US, New Zealand and Australia.

Unfortunately, one of Samoa Jet’s routes has proven to be unsuccessful; The residents of its neighbour country Tuvalu couldn’t be convinced to take a flight. Tuvaluans have only one destination in mind, which is the Fiji Islands, and connecting flights via Samoa would have distance too long to be considered. Most airline entepreneurs would ignore this and focus on other routes.

Proud of not being one of “most airline entrepreneurs”, there had to be a solution. So, Tuvalu Jet was born! A single Do 228 which operates the routes from Funafuti, Tuvalu to Nadi and Suva, Fiji Islands. This could be considered as the smallest viable airline in the game… Essential services for Tuvalu and its 11,000 residents are provided, and 41 jobs have been created as well. How does it need 41 people to operate a single aircraft, one might wonder.

Most positions should be pretty straight forward, but… 22 fleet managers?! What are they doing all day?

Or should we just be happy for those 22 for having gained a very relaxed job?