I’ve been playing airlinesim on and off for a few years. I have an ok-ish grasp on the game to the point that I find it enjoyable, however in no way am I a “hardcore-pro”. I have the following question:

One of my airlines flies a mix of F100s and A223’s. Recently a competitor dumped a tonne of capacity on an important city-pair of mine, flying IL18s (seriously…?!). I have pretty good on-board service, pitch, extra F/As, etc. so I charge a slight premium vs. default prices and it works.

When I looked in ORS to check my ratings vs. Mr Soviet (or Ms!) I was baffled to see that even my A220 has a lower equipment rating than the IL18, so let alone the price-image mix.

How is this possible?! The Il18 has the worst image of any aircraft, he must have basic seats, etc… How can an IL-18 have better ratings in ORS than an A220 or F100?

Lower price, am I right?

I’ve found your specific airline, city pair, and competitor. I’ll keep them anonymous, as you have as well.

He can begin with up to 34 IL-18s for the 10 million IDP, so the fact he only has 6 to start off makes little sense business wise. The only route he runs is the specific route you run, to two airports. He is not filling a single plane, and you seem to be. So you’re winning here.

Seats: he runs either Recliner LH with Slimline, or Comfort Plus with Standard or (the more likely) Leisure. The latter’s latter is more likely given the ORS disparities.

The ORS explanation is probably due to service… (and price). The image of the plane goes into the image of the overall airline (I believe) so that effect will be miniscule.
Pitch does very little. So if you can squeeze in an extra row (and fill it) I would recommend it.

In the new ORS (and to some degree the old ORS), the explicit rating does not necessarily matter as long as you’re filling the plane. The rating can help you fill it, but they’re not necessarily causal statements; you can, like in this case, have the worse ORS and fill your plane and not his - due to connections, per se. You’re the one making the money, and he isn’t. In old ORS, the rating has a bit more weight - not so much with new ORS.

His service is C is pitiful. The difference in the bottom rating I believe will almost exclusively be attributed to prices. (I hope you know that the top rating is for the actual flight and the bottom one is the price performance for the whole itinerary; for nonstop demand it will be the below but it will change if you’re inputting a different route.)
See the below comparative SS’s for the breakdowns. 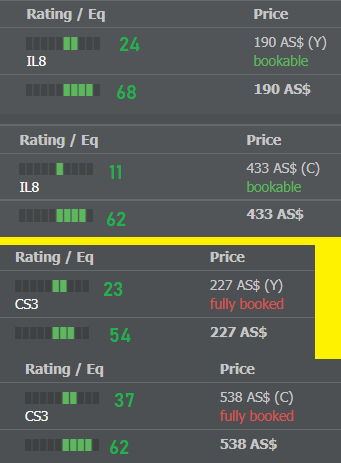 I don’t give this guy a lot of time left, but oh well.
I hope that answers the question.

Thank you for the comprehensive answer. Yes it all makes sense, in all honesty I wasn’t overly alarmed by the dude for the specific reasons you listed, I was just very shocked by the ORS ratings, but your explanation is pretty good.