Thanks for your help

Welcome to the forums, Zeke!

To answer the question, yes*.

You’re able to create a “via” flight, which means you use one flight number to serve two legs of a flight.

A couple of caveats.

If you schedule using flight plans: 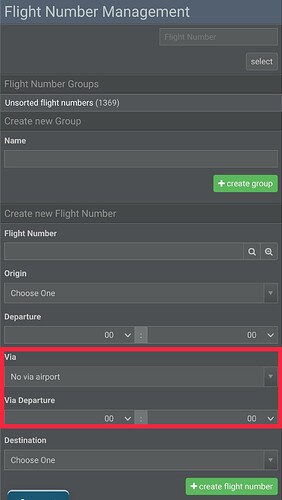 Hope that helps. Leave any further questions below!

I don’t think this is very common right? I think most players just have direct flights because via flights score worse in ORS. I guess even in real life is not common.

Well , it’s not common between larges cities , but I saw many of them from large airport to small ones in remote area , or less popular destinations .

Usually they’re limited to when they’re needed for Yamoussoukro or CARICOM rights. I’m not sure it really matters for the ORS the specific way you schedule a city pair like that. Compared to a nonstop, yes it will probably be less popular; but a via flight and two separate numbers I imagine would not make a difference?

I will try when my airline will have some money to take risk lol!

If you do it - do it without via. Do it direct. It´s much more easy if you want change the route later (f.e. exchance XXZ with XXW)

I´ve done it several times in the past, to avoid useless standing times for my planes (and get a better maintenance ratio) or fitting better into a hub-wave or because of missing slots or because of bypass a night-time curfew…

For expample i had have this Routes from my hub BHX on two planes:

No Problem, seats selled, maximum used plane. Passengers can connect to other flights in Milan or Luton (when availible) or still keep seating to Birmingham, but as far as i remember, most Passengers did not connect. But as mentionend before, my goal was not getting people from Palma or Brindisi with a connection flight to Birmingham, but maximum plane using.

At the moment, i don´t have some of this flights so i can´t show you my flightplans by screenshots. Because, this is not the common case, this have been execptions for the named reasons. I try to avoid this, but sometimes it necessary. Because planes earn money only when they in the air.

Vias are only usefull for flights within Yamoussoukro or CARICOM rights, as @jetcruise0707 mentionend before.

One other reason: with via-flights, you can schedule more flights as it takes only 1 flight number. I can’t remember the server but there is one Russian airline which has scheduled only via-flights. Amazing setup but also a lot of work.

This is something I’m noticing more and more of. The more flight numbers the better.

However, it is a pain in the a** to manage vias, especially when we do ASES. It creates empty O/Ds.
I had a MAD-FNC-PXO (since been replaced with MAD-FNC), and it created data pairs for MAD-FNC, FNC-PXO, and MAD-PXO (which I do not serve), so that would always cause bottlenecks.