I really don’t want to sound mean, but this sounds like a mess.
Domination game world has these sort of worldwide traffic rights, otherwise all other worlds follow very strict standards on the traffic rights.
Usually, you’ll have domestic rights (including any oversea territory), and a right from traffic to/from your country of HQ (anywhere in the country) to any other country.
In Africa, the Yamoussokro Decision exists, allowing you to schedule flights as “tag”, meant to foster inter-african routes as many of the nations don’t have national airlines. It’s a great reason why ASKY works so well as an airline IRL. This allows you to schedule a flight from your country to any country inside the agreement VIA any other country inside the agreement.
Those are https://[insert gameworld prefix here].airlinesim.aero/action/info/treaty?id=2

They work like this in a map. Note that for these you have to explicitly schedule “via” flight numbers for the YA flights, meaning the whole itinerary has to be under one flight number in one direction. 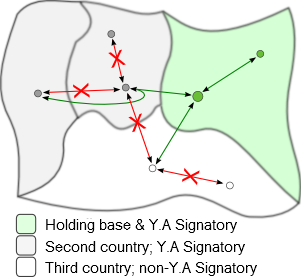 Granted you can do the via thing for all airlines worldwide, and work on tag traffic. However this has some serious downsides if you don’t have local traffic. So say you fly LOS-ALG-CDG. You can fly passengers from LOS to ALG, and LOS to CDG, but NOT ALG to CDG. So any pax flying to CDG have to be also coming from Lagos, which there might not be room for if you also do algiers.

For your specific example (again in any world other than Domination), you can probably only do the first leg, JNB-LOS, as Brazil isn’t part of YA. Forget about Havanna and Norfolk. That won’t even be a day’s flight, plus you can only do one via airport per flt #.

I would recommend not focusing on these complicated (and not very lucrative) island hoppers (or whatever) as a beginner, and focus on short haul traffic on one hub in one country. That will be the best way to learn. Start small (and in a short term world!), small planes, but not too small destinations, but not too big either. Too small and you won’t fill any, too big you’ll run into tons of competition and slot issues (something you should try to avoid as a new player.)

This is an old “tutorial” but it’s the best we have now after the old one was taken down for one to never resurface. I would advise you give it a long read, some of the stuff (especially seats and stuff) is old and I’m working on an update, but I won’t have that ready for a bit still. If you need any further questions or assistance, that’s what the forum is for, or you can reach out on the discord. We’re happy to help there too, and it might be a bit quicker.

AS for beginners - an attempted blog Community Support

Hi I go by the nick of yukawa and I have been playing AS for some years now. A while ago, I wrote an introduction to AS for beginners on the German board (as I am a German). I always meant to translate that to English, but never got around. Now, I want to give it another go by writing a kind of block. It's more of an endless explanation, though. As the "blog" continues, I might go into more "advanced" strategy, but that depends on how my "case study" is going. don't be surprised, if you find s…

And you won’t need to get rights. The only thing you’ll need is an airline, the rights come with it. You’ll need stations and slots, but you don’t buy those. And if you’re starting in a less busy hub, they should be easy to get.

The hint to the tutorials is the most valuable.