The reason I will try to start my own server is that since the start of Zeppelin I have played on Zeppelin until it shut down, I then tried to board Constellation and then Lebourget, Drama has since made me no longer feel like to play on these servers, there are also too strict rules on some of the servers that do not really fit my needs.

The rules I intend to start with are.

3), EU Treaty, This will be allowed and the server will get an “open investment B list”, this means that larger markets like Kazakhstan, ukraine etc will be open markets. BUT! it will ONLY be allowed to operate to and from its home markets, for example if you own airBaltic, then you must make routes out of Estonia, Lithuania and Latvia, if you own Swiss, then you may only create routes out of Switzerland, this is helping to create realism and fair competition, now I have seen so many places that KLM operates out of Barcelona and LOT out of Paris, this is something I personally do not like as it primarily blocks slots if eg AerLingus has a base in Warsaw and there is a brand new player who wants to try out LOT, so he who wants to try out LOT may have a hard time getting into WAW and building a good foundation for a company.
NB: Start of money will be 75M.

4), Setup, as mentioned above, the setup without nighttimeban, with B list and old planes is allowed. NOTE: These are planes that have been in production after 1980 as planes from that year will ruin the game a bit if, for example, player B buys 100 DC10 for 50k each and thereby meets an airport lightning fast. everything from the B747-300 onwards will be in the game and up to the latest A350.

5), payment that must of course be contributed and it will be monthly payment of 15 euros per month and 25 players allowed on the server. and we use DIscord for communication which I have linked to below, EVERYONE is welcome to join the Discord server for a chat if you want to know more.
I use Paypal to contributions, details pr PM

Discord: https://discord.gg/wPYaYE
(i used Google Translate cause my english is not the best but ur really welcome to ask if you have some questions) <3

Are ILs between own companies allowed?
Hiw will you distribute the world? Is everybody allowed to open everywhere? Or is there a wish list?

IL’s between holdings are of course allowed, this I completely forgot to mention in the description and I just add it.

You can open your holdings wherever you want, however, a maximum of 4 holdings in Europe
However, I prefer that the maximum is 3 farms per country but this can be discussed, this is so it will not be a huge goat market on top of, A country like Germany can be an exception for 3 people as it is so huge

How the world will be governed will be by a team of 3 people in the management due to as nothing works so perfectly without a management, 3 people is because democracy is run and there should be no possibility of voting for a proposal.
When the management has discussed things, it is handed over to the rest of the players on the server so we can hear if there should be changes to the rules, everyone should have fun and I do not bother with a dictatorial feeling that NOBODY is heard.

The Discord-link has been updated

both discord links are showing up as invalid

Discord updates the link at all time :-(… https://discord.gg/hKjEsp3 try this

We are now 11 members in the project, the server was required to start the 1 September, the first paidment will be 45 Euro’s pr person (3 month paidment) (if we start with 24 persons inclusive my self, more if we are smaller then 24) and for all time in the future will the paidment be 15 euro pr month.

Hello, did u already in the discord or i should to sent u a new link :-)?

Hi, do you plan do play with new aircraft only? I personally like to play with Fokker and A300s and so on… (not used but available to buy!)

This aircraft models will be aviable

And i can now update to people we are 14 players, wow i dont thought the project was going so fast im so exicted for that, if all going well will we launch the 31Aug-1Sept

We have 11 slots left

hi i might be interested too i am in constellation at the moment and i do remember you think i joined your discord too can i private messaged you if ok thanks :).

PM arrived and now we are 16 members, we still have 9 slots guys!

The Discord is still here.

Check out the AirlineSim Project Tegel community on Discord - hang out with 12 other members and enjoy free voice and text chat.

Hi, I would like to join. Are there still places left?

We have 2 slots left and some nice opportunities. Join in!

Is there one more slot open for me?

Check out the AirlineSim Project Tegel community on Discord - hang out with 22 other members and enjoy free voice and text chat. 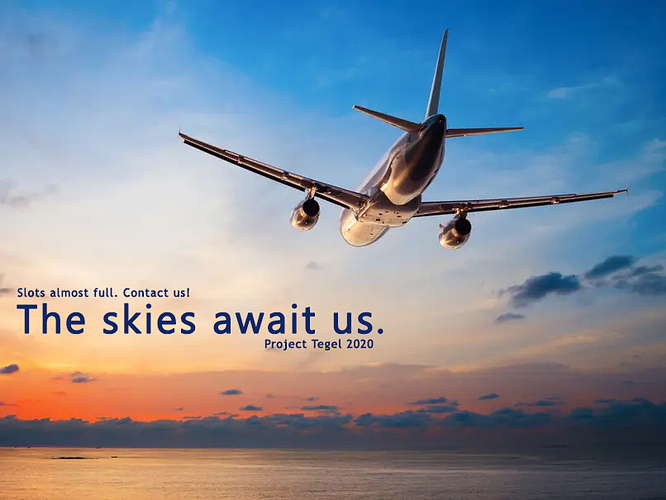 Tegel still had some slots, we hope to see u soon in our own community with prof AS gamers